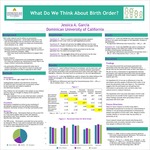 What Do We Think About Birth Order?

Stereotypical beliefs people have of personality traits that are expected from children in relation to their birth order has become a popular area of study. Parents can be consciously or unconsciously swayed to form impressions of their children based on birth order personality attributes formed by society and family. How parents act towards their children can impact a child’s cognitive and behavioral development (Eckstein & Kaufman, 2012). Using Adler’s psychological perspective theory, the present study hypothesized that there is a positive correlation between people’s perception of birth order traits and self-reported personality. Participants were 50 adults (84% female) 18 to 62 years old and primarily recruited on a university campus. Participants completed two online surveys, both shortened forms of Big 5 personality dimensions. The Mini-IPIP was used to gather participant’s self-reported personality traits. The TIPI was used to evaluate which traits the participants expect to see from a person that has the same birth order as them. Results demonstrated that there is a positive relationship between perceptions of birth order traits and self-reported personality. This is important because it suggest that Adler’s psychological perspective theory could be a more reliable measure to use compared to Sulloway’s evolutionary theory (Eckstein et al., 2010). Findings also add validity to Adler’s claim that the type of role a child adopts and the development of characteristics are a result of its interactions with family and society. Limitations include a small sample size and inaccurate hypothesized birth order traits. This study demonstrates that it is crucial for researchers to keep in mind that the family structure is the system from which specific birth order personality traits can develop and that parents should be aware of forming impressions of their children based on stereotypical societal beliefs.