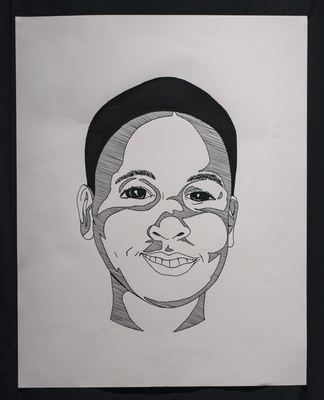 I define myself as an activist artist. I want to improve communities and make a difference with the pieces I create. Artists have always been at the forefront of change, creating images to unite people and drive them forward. I need my work to do just that: to inspire people to push for change, even at the price of making them uncomfortable.

This series is made up of portraits of people of color killed in the last decade, with my ultimate goal being to pay homage to victims of police shootings in the United States. These people died as the result of a system that too often prioritizes a quick response over a proportionate one, and that fails to give the benefit of the doubt to minorities, instead seeing them all too often as threats, aggressors, and ultimately as targets.

Though many know their stories, I hope that by seeing them as they were, face to face, the viewer will be reminded that these were not just names in a newspaper, but were men, women, and, children.

This work is licensed under a Creative Commons Attribution 4.0 International License.