Gallery Exhibition | Heart of the Matter: The Art of Foad Satterfield 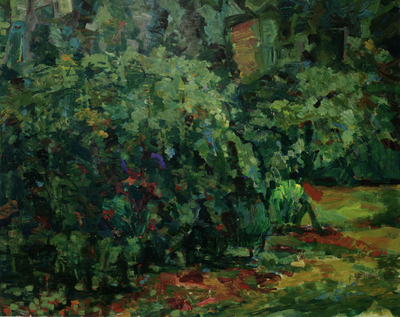 For three years I noticed the change of texture and color in this large hedge located outside of our Emeryville Condo. The seasons revealed to me various aspects of density, space and color. This was a large plant sitting in an open space with a lawn as foreground and an interesting background of geometric shapes that were the building behind it.

It became clear to me that this observation was a metaphor for the subtle shifts of perceptions that I experience when my attention was drawn to this area, over and over again. At this point I began to think of making a painting of what I was feeling. There was the question of scale, how big should it be; how would I manage painting this deep and dense foliage without it becoming comic and descriptive? Most importantly what was I trying to say?

To date I had never attempted a painting at this scale or complexity. I tried not to over think making it, or the process. However, I did give myself some very specific parameters; use only large tools, use only a few hues and do not correct myself in its execution.

This painting opened the door for me in considering a series of large scale and related works such as: “Hollis Street Garden”, and “Big Fish Camp”.

As I began to focus on using nature themes as a point of reference I intuitively recognize that these themes were broad and could stimulate critical observation and active participation in constructing alternative perceptions and meaning.